Janelle Viera is a doctoral candidate in sociology whose research “focuses on race, ethnicity, migration and social mobility, primarily among Latinxs in the United States,” she says. She is originally from Queens, N.Y., and received her bachelor’s degree in sociology and anthropology from Swarthmore College. While a graduate assistant within The Graduate School at UNC-Chapel Hill, she launched an empowerment group for graduate students in the Latinx campus community: La Familia. 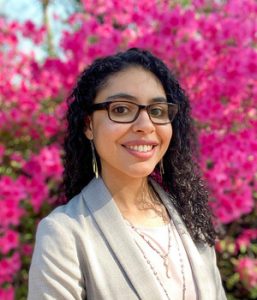 UNC-Chapel Hill was actually not on my radar for graduate school until I participated in the Moore Undergraduate Research Apprentice Program as a rising undergraduate senior. During that summer I had the pleasure of working with Dr. Kia Caldwell on my first research project on Puerto Rican social mobility, which later turned into my undergraduate thesis. Although I had initially hoped to follow in the footsteps of my undergraduate sociology mentors and join Northwestern’s sociology program, I did not get in. This turn of events led me to consider UNC’s sociology program more seriously upon being accepted. My experience during the program’s recruitment weekend was a positive one and motivated me to choose UNC-Chapel Hill for graduate school. I recall meeting with various faculty – including my current advisor, Dr. Jacqueline Hagan – who were familiar with my application and expressed enthusiasm for my scholarship.

My research focuses on race, ethnicity, migration and social mobility, primarily among Latinxs in the United States. My current project examines how social generational status influences racial formation among U.S.-mainland Puerto Ricans, and how this process unfolds differently by place. U.S. Census data show that existing racial categories do not reflect how Puerto Ricans and other Latinxs view themselves racially, and quite a bit of research has confirmed this through studies of racial classification and identity development among Latinxs. My project focuses on the ways that coming of age during certain time periods (i.e., belonging to a specific social generation) shapes Puerto Ricans’ understanding of race. I hope that this research will continue to highlight the diversity that exists within the Puerto Rican population, a Latinx group whose birthright U.S. citizenship makes them an interesting case for thinking about the relationship between race, citizenship and identity. I have conducted in-depth interviews with Puerto Ricans living in New York City and Orlando, Fla., for this study.

The Initiative for Minority Excellence (IME) has helped me tremendously in building community at Carolina. I experienced a very difficult adjustment period during my first year of graduate school. A friend told me about IME towards the end of that school year, and I started attending events more regularly. Before I knew it, I had developed a wide array of friendships with people who related to my experiences as a graduate student from an underrepresented group.

I was fortunate enough to have worked alongside Kathy [Wood, co-director of the Diversity and Student Success program] as a graduate assistant for a little over a year, which prompted me to attend almost every IME event – for social and professional development purposes – during that academic year. I enjoyed myself so much that it hardly felt like work! During this time, I also launched La Familia, an IME empowerment group for Latinx graduate students. This group has allowed me to better connect with the Latinx community on campus.

My goal has remained the same since starting graduate school: to work in academia as a full-time professor. I am passionate about teaching and mentoring, especially at the undergraduate level, so I hope to work for an institution that is committed to integrating research, teaching and mentoring.