Joseph Leshin, a doctoral student in psychology and neuroscience, was adopted and raised in  Los Angeles. He went to college at Cal Poly in San Luis Obispo, Calif., where “I realized I could study what had fascinated me as an adolescent: human emotions.” He completed three summer research internships on emotion as an undergraduate. Following graduation, he completed a two-year fellowship at the National Institutes of Health, where he studied psychopathology and emotion as well as correlating brain activity using functional magnetic resonance imaging (fMRI). “I came to UNC to design and launch my own fMRI project under the supervision of my advisor, Dr. Kristen Lindquist.” 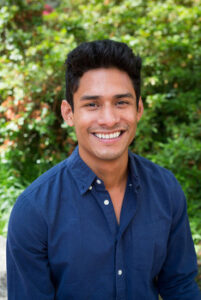 I mainly chose UNC-Chapel Hill because of my advisor, Dr. Kristen Lindquist.

For as long as I can remember, I have been fascinated by emotions. I knew I wanted to study the nature of human emotions – where they come from, how they are made, the functions they serve – in graduate school. To prepare for applying to graduate school, I surveyed theoretical approaches to studying emotion taken by several affective scientists. Ultimately, I found Dr. Lindquist’s approach the most compelling.

Today, I work alongside research assistants, graduate students and Dr. Lindquist at the Carolina Affective Science Lab, where we investigate how the brain and mind create emotions. Our research shows that emotion categories like fear are a product of more basic psychological processes, such as attention, language and conceptualization. It is through these building blocks, or “ingredients,” that humans construct their emotional experiences.

I take both a neuroscientific and social psychological approach to identifying mechanisms that give rise to individual differences in experiencing and regulating emotion. For instance, I have brain data that shows that during instances of sadness, white American participants show greater activation in the precuneus – an area implicated in self-referential processing – relative to their Chinese native counterparts. These results may suggest that white Americans foreground the self in their mental representations of sadness more than individuals from China, which parallels existing work that demonstrates cultural differences in self orientation to negative emotions; that is, white Americans view negative emotional experiences as more intrinsically tied to the individual self than people from China, Korea or Japan.

I also have behavioral data that shows people generally make meaningful associations between specific emotion regulation strategies, like reappraisal and suppression, and discrete emotion categories, like fear and sadness. These data suggest that people rely on reappraisal (such as reinterpreting negative events in a more favorable light) significantly more in sadness than in anger, disgust or fear. They rely on suppression (for example, inhibiting negative feelings intentionally) significantly more in fear and sadness than in anger or disgust. More importantly, these associations between emotion regulation strategies and discrete emotion categories map onto psychological well-being: Those who typically reappraise in sadness more than anger, disgust or fear report ruminating less often.

Although my closest friends at Carolina come from my department, I’ve also connected with communities outside my department to support my various identities. In addition to being a Ph.D. student in psychology and neuroscience, I am adopted, gay, Latino and Jewish, and these identities are incredibly dear to me – they are the essence that reinforces my sense of self. Academia is known to engender loneliness, particularly in BIPOC scholars; therefore, it was especially important that I sought community to support my self-identity.

As I reflect on this question, I feel gratitude not only for the Tar Heel family I’ve built, but also for the communities and spaces that have made this possible: my program, the queer community, the Initiative for Minority Excellence, and synagogue.

I have two goals I want to accomplish. First, I want to learn as much as possible about the human brain and how it supports our everyday conscious mental life. Second, I want to create space for underrepresented scholars, particularly racial minority scholars, so that they may pursue their academic aspirations. Related to this latter point is one of the best parts about being in academia: I get to meet and work with so many bright and ambitious undergraduates, and I get to help them advance in life! It’s quite remarkable and rewarding.