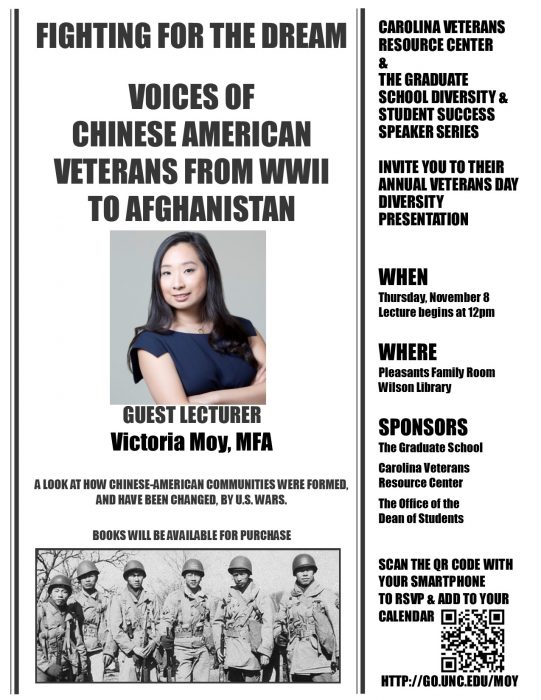 When people think of American veterans, individuals of Asian descent rarely come to mind. It’s been all but forgotten that up to 20,000 Chinese Americans (about a quarter of the Chinese American population at the time) served in World War II–the highest ratio of any national grouping. Asian Americans continue to contribute to the U.S. military and to the fabric of American society today.

Through historical pictures and firsthand oral histories from U.S. veterans of Chinese descent, ages 24-104 from the book “Fighting for the Dream: Voices of Chinese American Veterans from World War II to Afghanistan,” Ms. Moy will look at what it’s meant to juggle being both Asian & American, from the lens of Chinese American men and women who’ve served. These individuals defied boundaries, went against their cultural grain, and changed history. Their stories paint a greater tapestry that is the story of America itself in the last hundred years, and how war and their service affected Chinese American communities.

Victoria Moy is the author of “Fighting for the Dream: Voices of Chinese American Veterans from World War II to Afghanistan.” She was born and raised in New York’s Chinatown, and the granddaughter of a Chinese American World War II veteran, which has inspired articles, plays, and a book. She is a playwright, screenwriter, arts critic, and journalist, having published pieces for Brooklyn Rail, Huffington Post, New York Press and other publications. She holds a B.A. in Theater from Dartmouth College and a M.F.A. in Dramatic Writing from USC. She currently splits her time between Los Angeles and New York. More details about her works can be found at VictoriaMoy.net