Ex-Gay Programs, Ethnographic Research, and the Failure of an Academic Project 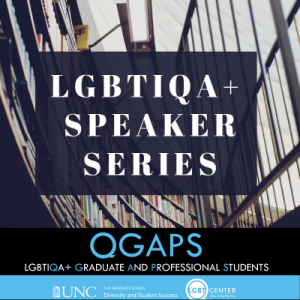 In the 1970s religious “ex-gay” programs began to pop up around the United States. While the popularity of these programs peaked in the 1990s and early 2000s, many still exist today. Often stemming from fundamentalist Christian churches, ex-gay programs claim to help individuals struggling with the intersection of their sexuality and their religious beliefs. However, multiple studies have found that these programs are harmful to the individuals who take part in them

In this presentation, Dr. April Callis will discuss a research project that she worked on (and ultimately abandoned) in 2013 and 2014 around ex-gay religious programs. While she will be discussing the ex-gay programs themselves, she will also take a meta view, describing the process of gaining access to a closed community, and the difficulty of collecting data that you’re scared to publish. When is walking away from a research project the best call?

Dr. Callis is the Assistant Director of the LGBTQ Center at UNC-CH. She earned her PhD in Cultural Anthropology from Purdue University in 2011. She has conducted research on bisexuality and other non-monosexual sexual identities, the intersections of religion and sexuality, and sexuality in fanfiction. Her work has been published in Sexualities, the Journal of Bisexuality, the Journal of Homosexuality, and in Transformative Works and Cultures.

Lunch will be provided! Please register to ensure we have enough food for everyone.

If you have any questions or accessibility needs, please contact Erin Case, Graduate and Professional Student Program Coordinator, at erincase@live.unc.edu.