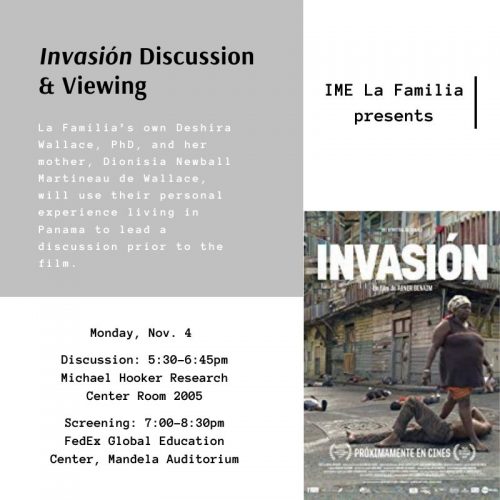 La Familia’s film series, Perspectivas, features films from/about Latin American history, people, and culture. This month, we are hosting a discussion of the documentary, Invasión, before watching the film.

La Familia’s own Deshira Wallace, PhD, and her mother, Dionisia Newball Martineau de Wallace, will use their personal experience living in Panama to lead the discussion and provide context for the film. The discussion will take place at the Gillings School of Global Public Health, Michael Hooker Research Center Room 2005 from 5:30-6:45pm. There will be snacks and drinks available. Bring friends and guests!

After the discussion, we will walk over to the FedEx Global Education Center, Mandela Auditorium to watch the documentary from 7:00-8:30pm, as part of the NC Latin American Film Festival.

Invasión Film synopsis: “Everyone has their own version of the invasion.” That is film director Abner Benaim’s point of departure, because ultimately everyone has their own subjective memory of the events that took place in Panama between Christmas and New Year of 1989 – when American troops deposed dictator Manuel Noriega, killing an unknown number of civilians in the process. Invasión (2014) was selected as the Panamanian entry for the Best Foreign Language Film at the 87th Academy Awards.